Apart from stage winner Greg Van Avermaet’s epic stage win (maybe crashing out of the Tour of Flanders and missing Paris-Roubaix has an upside), people are talking about Giro d’Italia champion Vincenzo Nibali and his terrible day.

Cycling Central has it here.

I’ve got a CRAAAAAZY theory about Nibali’s slide down the overall rankings, shipping more than EIGHT MINUTES to the GC big boys, on a stage that he really should have had no trouble with. Cue mutterings about his form, his bad legs, and his overall ambitions being dashed. I suppose that’s the official line.

Bullshit, the lot of it. It’s all part of his cunning plan. Consider:

That’s why Vincenzo looked like he wasn’t even trying on stage 5, when he plopped off the back as soon as Movistar turned on the power. He wasn’t trying.

He wasn’t breathing hard, his shoulders weren’t rocking, he wasn’t all twisted and hunched like the injured Alberto Contador, and he wasn’t pedalling squares like Peter Sagan. He was cruising along like it was a coffee ride, giving zero fucks. In fact, you could almost see him calculating how much time he needed to lose before he’d be allowed up the road in the Pyrenees this weekend.

Don’t be surprised if Nibali pulls out the earpiece on any of these stages, launches himself up the road and takes a bit of glory for himself. It’d be a perfect slap in the [rubber] face to Aru, adds to his market value in a new contract year, and reminds everyone why he’s nicknamed after an apex predator.

For that plan to work, it’s a big advantage if he’s not a threat to Team Sky, Movistar, Tinkoff or BMC.

Besides, can you really see Nibali playing loyal domestique to his understudy and arch-rival Aru? With his ego? Haaaahahaha!

The Grand Tours have finished for 2014 and we’re on the downhill run to the season’s finish.

This week, as I soft-pedalled my way through the ennui that accompanied this depressing realisation, a thought struck me: ‘if you could pick a dream team of nine riders based on their performances in Grand Tours this year, who would you pick?’

It would have to be a balanced squad, not just a team of GC whippets. You’d need some sprinters and some blokes to do the grunt work. You’d have an unlimited budget (hey, spreadsheets are for proper jobs).

Some selections were easy. Yes, predictably the three GC winners are present, but each of them won their respective titles in relatively straightforward fashion, were clearly the best riders in the races. I couldn’t convince myself that Jean-Christophe Peraud’s battling second at the Tour was better than Contador’s win at the Vuelta.

Marcel Kittel is another obvious choice. He almost can’t be beaten.

The others are less clear cut, and I’m sure there’s a few of you who’ll have other suggestions. It’s hard picking just nine guys. Anyway, here’s my Grand Tour Dream Team.

Unlucky to miss out:

Peter Sagan
His Tour de France green jersey showed his consistency and versatility, but he didn’t win a stage. He also failed to win a stage at the Vuelta. If he can overcome being a marked man, and rectify some tactical naivety, Sagan clearly has enough buckets of ability to fill an Olympic swimming pool. This year, he’s been better outside Grand Tours than in them.

Michael Rogers
Has had a great year after the worst possible start, under a doping cloud. Since being cleared, he’s ridden with a freedom that has rarely been seen during his long career, and it’s netted him two Giro stage wins, and one at the Tour. That’s a great return for a guy who doesn’t get many personal opportunities. Also a great team man.

Alejandro Valverde
Probably the most versatile rider in the world. How many others can win during the spring classics (he won Roma Maxima and Fleche Wallonne, and was second at Liege-Bastogne-Liege), miss a Tour de France podium by a handful of seconds, and then back it up with a Vuelta that netted him 3rd overall, 2nd in the points jersey, 3rd in the mountains jersey, and two stages (one individual, and a team time trial)? He’s got lethal finishing speed for a guy who can climb with the elite, and he’s also amazingly consistent through the season. He might not win a Grand Tour again, but he’s usually not far off the podium and he really loves a stage win.

Fabio Aru
Astana’s ‘mini-Nibs’ emerged from obscurity this season to finish on the podium in the Giro and 5th at the Vuelta. He also won a stage at each, showing that at just 24 years old, he’s Italy’s next likely Grand Tour challenger after Nibali himself.

Nacer Bouhanni
Despite being the second-favourite sprinter on the FDJ.com team, Bouhanni cleaned up five Grand Tour stages this season: three in the Giro and two in the Vuelta. Bouhanni only misses out because Kittel dominates him head-to-head, and he’s still not versatile enough when the road gets lumpy.
He’s had a combative year with his team management preferring Arnaud Démare for the Tour, and his race programme has been cut short by criticism of FDJ management after he signed for rivals Cofidis for next year. Despite all this, he won more Grand Tour stages in 2014 than Mark Cavendish and Andre Greipel combined.

Adam Hansen
Because how can you have a Grand Tour team without Adam Hansen? He’s now finished ten in a row, and even claimed a stage win at the Vuelta this year. Hansen is the ultimate team rider, and everyone knows it. He’s also grown in confidence over the last two years and is now often making the race. Very dangerous in a break. 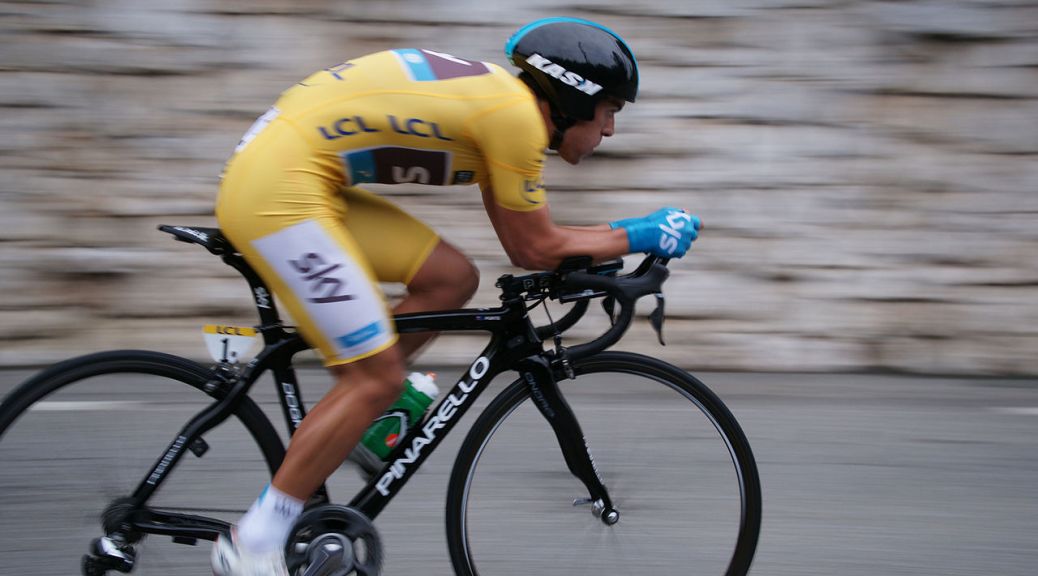 Without the fine bubbles, Champagne would still be a quality white wine, made from good quality fruit by expert winemakers, but it’d be lacking something special.

So it is with Paris-Nice, which still boasts a high quality roster of riders and will almost certainly be closely fought and exciting.

But the race is different this year: there are less hills, no summit finishes and no time trials.

The missing fizz is that virtually all of the serious Grand Tour general classification riders have bailed out.

Last year’s winner, Richie Porte, isn’t riding. His bosses at Team Sky decided he would be better off replacing an injured Chris Froome (more on that later) on the hills of Tirreno-Adriatico than spending a week rolling in behind bunch sprints in France.

That was absolutely the right call – defending his title would’ve been virtually impossible for Porte, given the changed nature of the race, and Tirreno-Adriatico will provide better preparation for his major objective, the Giro d’Italia.

“Racing in Italy, that’s where my big goal this year is – at the Giro – so it really does make more sense to go there. And it’ll give me a good gauge to see how the other guys targeting the Giro are going.”

Christian Prudhomme, race director of Paris-Nice and the man who also oversees the Tour de France, was a bit miffed by Sky’s late swapsies, telling AFP: “We find it cavalier to have the reigning champion pull out just before the start.”

Well, Christian, with respect, perhaps you should have considered that before you designed a race that would be damn near impossible for the reigning champion to defend.

The late change should not be a reflection on Porte, even though he seemed pretty happy with the changes. The decision rests with team management, and they’ll be the ones locking horns with Prudhomme over it.

To be fair to Prudhomme, he justified the decision to avoid summit finishes by pointing out the the race will probably be close right until the final stage,

“We did this to make the race attractive. The race can be decided on the flat stages and on the hillier stages to Mont Brouilly, [Mur de] Fayence or even on the last day.”

I suspect he’s right, but the flatter parcours was still a mistake.

There’s enough climbing there to make this race too hard for a pure sprinter to win overall, but a strong all-rounder like Costa should be the favourite.

The first three stages suit sprinters; the next three suit classics riders who can power over short climbs; and the final two have some hard category 1 climbs which should decide the race.

The lack of summit finishes means we should see some sprint finishes from small select groups. The time gaps will be small.

So yes, I still think Paris-Nice will be a really good race to watch. But so what? The classics riders have the classics, the sprinters get a go all the time. Stage races with real hills and high quality fields are rare and special, and this year there’s one less of them.

I don’t like it, but I will still watch it.

One bit of good news for Prudhomme is that Nibali is riding Paris-Nice instead of defending his Tirreno-Adriatico title. I’m not sure if he thinks he can win the race, or whether he’s trying to win over the French public before the Tour.

There is support to be gained from the fickle ‘anyone-but-Sky’ elements of the cycling public, and it’s probably fair to say this year’s Paris-Nice suits Nibali about as well as it suits Porte.

At least Nibali is better known for attacking downhill than Porte, so perhaps he fancies his chances of pinching a win on the trip south.

Meanwhile, Team Sky has been keen to stress that Froome’s injury is nothing too serious, more of a precaution than anything else, and definitely not a sign that the wheels are about to fall off Sky’s 2014 season.

Sky’s team doctor, Dr Alan Farrell, said that “Chris has suffered a slight inflammation to the sacroiliac joint in the lower back. As a precaution we have chosen to withdraw him from next week’s Tirreno-Adriatico so he can focus on recovering and preparing for the Volta a Catalunya.”

Hopefully the situation improves rapidly. I couldn’t bear to spend the next three months speculating about Chris Froome’s pelvis.