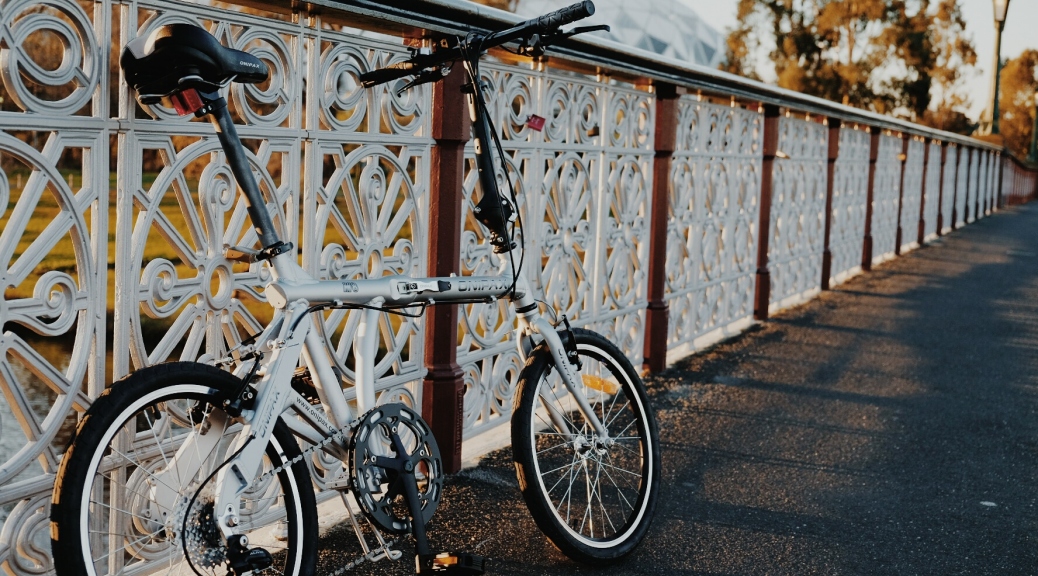 A functional foldie with decent specifications for the asking price, but not without its quirks and foibles. It’s no Brompton, but it’s 80% of the way there for 15% of the cost.

I’ve gone and done something which will forever undermine my bike cred. It marks me out as a hubbard – nay, as King of the Hubbards – and I may be stripped of my carbon fibre license. Pass me the corduroy trousers, I’ve bought a folding bike.

To be honest, it’s not the first time. I once owned a black Brompton S2L, when I lived in London. It was stolen in broad daylight from one of London’s busiest shopping districts, by a very well organised thief.  I was so angry.

Bromptons are great bikes. They’re beautifully engineered, fold up very compact, and ride quite well once you get used to their tiny wheels. They’re also not cheap, especially not in Australia. There’s a bike shop in Melbourne selling Brompton S2 models for more than $2K.

There are loads of other high-end foldies aimed at touring, performance, even off-roading. Companies like Bike Friday, Airnimal, Moulton and many others have their own cult followings. They all cost far, far more than I could afford to spend on a bike that exists only to dawdle a few k’s at each end of a train commute, a couple of days a week.

When I can, I ride all the way to work. But some days it’s just not practical, and I’ve found that taking a normal bike on a crowded peak hour train is a great way to learn a few new swear words. I needed something cheap that wouldn’t block the train doors. Not just ‘reasonably priced’, I’m talking ‘you could blow more on a night out and not even call it a proper bender’ territory.

Given that pretty much any foldie is the bike credibility equivalent of wearing sandals and socks, I’ll be damned if I’m buying fancy sandals.

So, cheap folding bikes. You’ve got your Dahons, and your Dahon clones. Aldi does one for $149, but it’s heavy and, well, I don’t trust a bike from a budget supermarket. There are Polygons from Indonesia. There are Terns, which are the illegitimate son of Dahon. There are rebadged OEM models of unknown provenance. There are Chinese ones on Alibaba and eBay.

It’s the M8 model, in the middle of the range. It’s got a 6061 Aluminium frame, Shimano Alivio 8-speed rear derailleur (no front), Tektro V-brakes and levers. These are brand-name parts, which means the spec level is better than any other folder I saw at a similar (entry level) price, and we all know the Taiwanese build a ridiculous percentage of the world’s bikes. They generally know what they’re doing.

Onipax has a couple of higher-end models, including an 18-speed model with Tiagra. Even though the racier models are prettier, I thought that was overkill (hey, a bike with 20″ wheels is never going to handle like a standard bike no matter how much you spend) and opted for the M8, which lacks a front derailleur (less to maintain and less cables to interfere with the folding).

The most important piece though is the frame. Fortunately, the Onipax frame is solid, the welds are massive and it seems almost overbuilt. 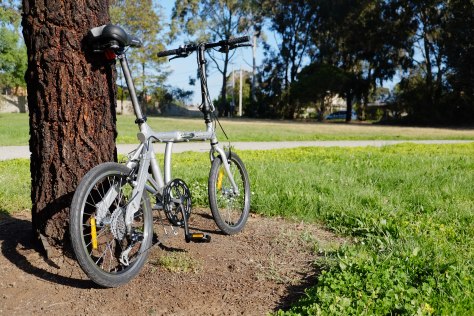 Out of the box, there was a fair bit of assembly required. The derailleur seemed to have been bolted on without any adjustment. Only 5 of the 8 gears were accessible, until I had a major fiddle with the limit screws. Likewise, the brakes were poorly adjusted (in fact the arrangement of the front brake cable was such that the ‘noodle’ holding the cable onto the v-brake caliper kept popping out, leaving me with no front brake – that’s downright dangerous). The (huge, padded) saddle was loose. The headset needed tightening to eliminate a small amount of ‘play’.

Most of this is pretty minor stuff to fix, but if I wasn’t handy with bike tools, I would have been in trouble. As it arrived, the bike was not really in a state where it could be safely or enjoyably ridden. Really, the retailer should have sorted this stuff out. Keep that in mind if you’ve never assembled a bike and are ordering one of these online. If you’re not an experienced bike mechanic, factor in the cost of a trip to your LBS for a once-over. 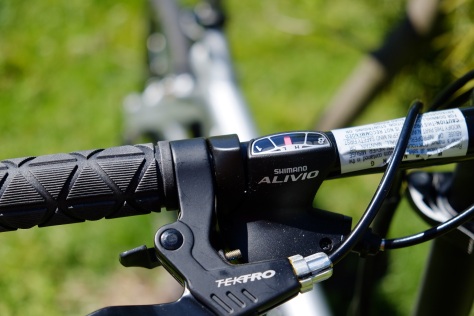 The Alivio trigger shifter isn’t super crisp, but it does the job. The ride

You don’t buy a cheap folding bike for the ride, you buy it for convenience. It’s utility first, second and third.

That said, you don’t want it to ride like a pig. Folders tend to have a weird upright riding position, and small wheels  can give them twitchy handling.

The Onipax feels more stable than my Brompton (its wheels are a few inches taller) and it corners about as well as could be expected given the inherent limitations of small wheels and a frame with several joins. I can’t carve it through the office carpark like Nibali coming off the Poggio, but it’s actually pretty good.

That stiff frame helps. There is a slight flex from the extendable handlebar column (you might call it the stem), which is also too tall – it’s a real ‘sit and beg’ position – especially considering I’m above average height at 180cm. For a shorter rider, this would be like riding a chopper. I’d prefer a shorter, one-piece stem for stiffness and a more normal riding position, which would improve the handling.

There are some aftermarket stems available for other folding bike brands – the Onipax uses a threaded 1 1/8″ (28.6mm) fork which seems fairly common – something I plan to investigate.

To be fair, even Bromptons have a little bit of flex through the handlebars (it’s an inherent problem with having a long stem and a hinge) so I can’t be too critical.

Going uphill it’s not so good. On a road bike my preferred method of climbing is ‘out of the saddle and full gas’. On a bike with the geometry and small wheels of the Onipax, you can’t easily get out of the saddle. Worse, the high and slightly flexy stem means you can’t really pull hard on the bars. It’s a sit and spin deal, I’m afraid.

The 8 speed cassette has a wide enough range to get up most gradients, it’s just a bit slower than I’m used to. Overall, I definitely wouldn’t want to do Around The Bay on this, but for short urban (or suburban) hops, it’s functional enough.

It’s your standard 3-place fold: mid-frame; stem; seatpost. The folding mechanism isn’t that smart, but it works well enough to squeeze in next to the doors on the train and stay out of the way of caffeine-deprived suits on their way to file TPS reports. 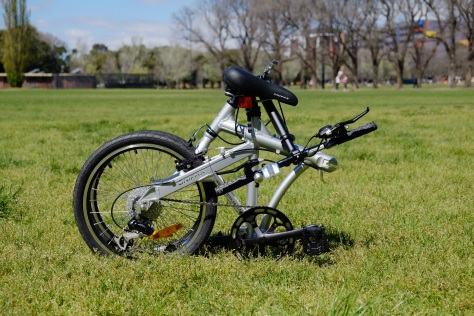 The stem also extends via quick-release, but even at its lowest it’s far too high for me, so I have no idea why anyone would want to extend it. It also has some plastic folding pedals, which are terrible. They will definitely need replacing. The main folding mechanism is a quick release with a safety catch. It’s effective, but a bit fiddly, which I suppose is vastly preferable to having it fly open unexpectedly.

There are no magnets or catches to keep it from unfolding, as far as I can tell. I’ve been using a leather strap from an old set of toe-clips to hold it together while carrying it on and off the train. I can fold/unfold it in under 20 seconds, and it’s light enough to easily lift and carry short distances. The looks There’s no getting around it, it’s pretty ugly.

In fact, this is easily the ugliest bike I have owned.

The weird mix of oversized round tubes, chunky welds, brace pieces, and the box-section chainstays doesn’t really add up to anything good. 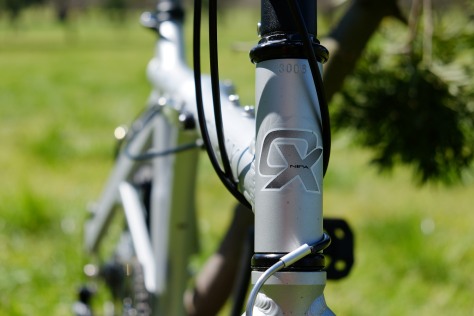 However, at least the paint job is pretty good, the chromed hubs are handsome enough, and the geometry looks vaguely purposeful, for a folder. The slightly forward-sloping main tube hints at a normal bike.

It definitely won’t win any beauty contests, but then you wouldn’t buy a foldie because you want it to look sexy.

The Onipax M8 seems well built, has good components for the money, and rides well enough for a folding bike. There are prettier, lighter folding bikes, and some of them fold up smaller, but they are more expensive.

Some assembly might be required, but most of the M8’s weaknesses are shared by other bikes in its class, so if you need a folding bike and can find an M8 on sale, this is a realistic option.

Time will tell if the hinges last, but my early impressions are favourable. Just don’t blame me if you buy one and everyone thinks you’re a total hubbard.