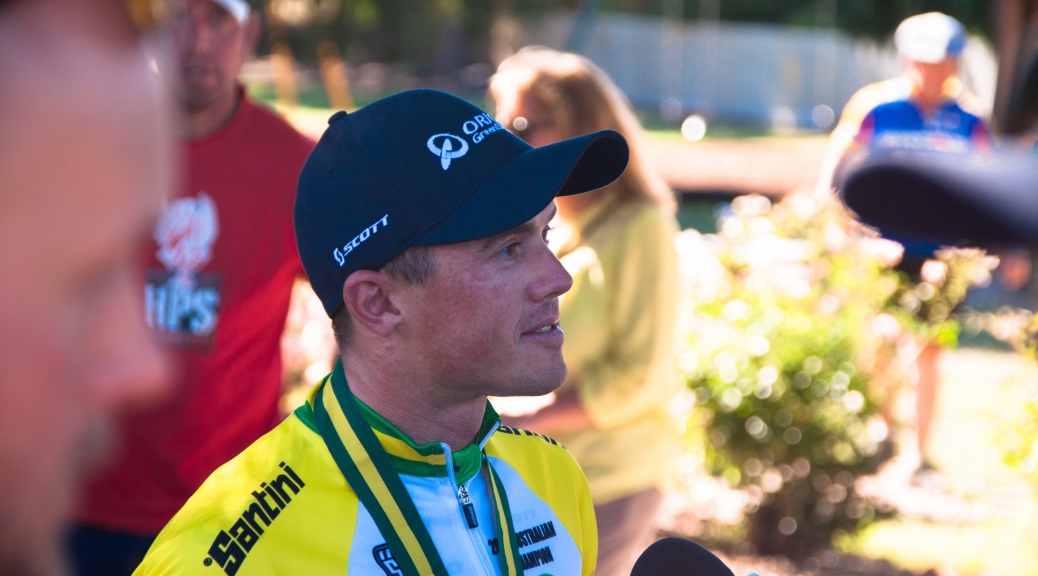 Simon Gerrans has crashed in training, broken his collarbone and will miss all the races of the Australian summer. It’s a disaster for Gerrans, who won’t be able to defend his National title or his Tour Down Under title; and it’s a major blow for his team.

The upshot for the rest of us is that Nationals in particular, and to a lesser extent the TDU, have been blown right open. Suddenly what looked like another OGE Buninyong bully session is looking a lot more even.

In Australia over the past few seasons, Gerrans has been the closest thing to a sure bet in cycling. His development into one of the best classics riders in the world, backed by a team that vastly out-numbers and out-guns its rivals, means that Nationals has looked a lot like an Orica-GreenEdge club championships since the team’s inaugural season in 2012.

This time, the OGE spear will be without its point.

Is this finally Cadel Evans’ chance to win a National road race title, as he pedals off into the sunset? Could Australian sports fans even handle such a soppy finish?

Can Richie Porte do the business and prove that his injury- and illness-blighted 2014 season is behind him? He’s been telling journalists that his pre-season form is well ahead of the same time last year, and he wasn’t far off a win then.

Who will lead Orica-GreenEdge in Gerrans’ absence?

As one OGE rider told me (not strictly on the record) during the team’s recent promotional Winery Ride the team has Plan A, Plan B, Plan C and Plan D. OGE can make the race, while everyone else in the race has one shot only; they are forced to hope that things fall their way.

Now Plan A is out the window, so who steps up? OGE has a few potential winners, and the numerical advantage remains. But without Gerrans, OGE’s options are several guys who ‘could’ win, rather than guys who ‘will’ win.

Simon Clarke is probably the most obvious alternate leader: his ability to climb is important on the hilly Buninyong course, he can survive long days in the saddle, and he’s proven himself winning stages in Grand Tours.

In 2014 Clarke was sent into the day’s break, which almost stayed away until his teammates decided to pull it back in the closing laps. He was excellent in that role, so perhaps it would be tempting to have him play it again. If Clarke has a weakness, it’s his sprint. There must be some doubt that he can beat Evans mano a mano.

Michael Matthews will be kept up the OGE sleeve in case the break fails again – he’s extremely unlikely to be beaten in a bunch sprint by anyone who can survive the last few climbs up Mt Buninyong, but then again could he follow Evans and Porte up the hill if they really went for broke? He couldn’t in 2014.

Cameron Meyer was agonisingly close to winning in 2014, until Richie Porte dragged Evans and Gerrans across to his wheel in the final lap. Meyer certainly looked sharp in the Australian Madison championships last weekend, so he’s another option, perhaps for another late attack.

You might even think about Luke Durbridge, who won in 2013, or Caleb Ewan. But the team suddenly looks heavy on time-triallists, and light on for guys with Aussie passports who regularly win road races.

Despite the numerical advantage (and it is a significant one) the Aussies riding for other teams will suddenly be thinking they’re a realistic shot at wearing the green and gold hoops in 2015.

Drapac Cycling will also be important, buoyed by a fresh three-year sponsorship deal with Jaguar and signings of veteran sprinter Graeme Brown, climber Tim Roe, and Swiss rouleur Martin Kohler – all three of whom bring World Tour experience – and young Aussie talent like Sam Spokes and Brenton Jones. It’s a powerful outfit (even without Kohler at Buninyong).

Whatever happens, suddenly it’s all up the air. Tactics, favourites, leadership, jumbled up like Gerrans’ shattered clavicle.

For the absent Gerrans, he’ll reset his sights and peak for the spring classics, no doubt cursing his treacherous mountain bike and the opportunities missed, but knowing that it’s a long season and bigger prizes await in Milan-San Remo and the Ardennes.