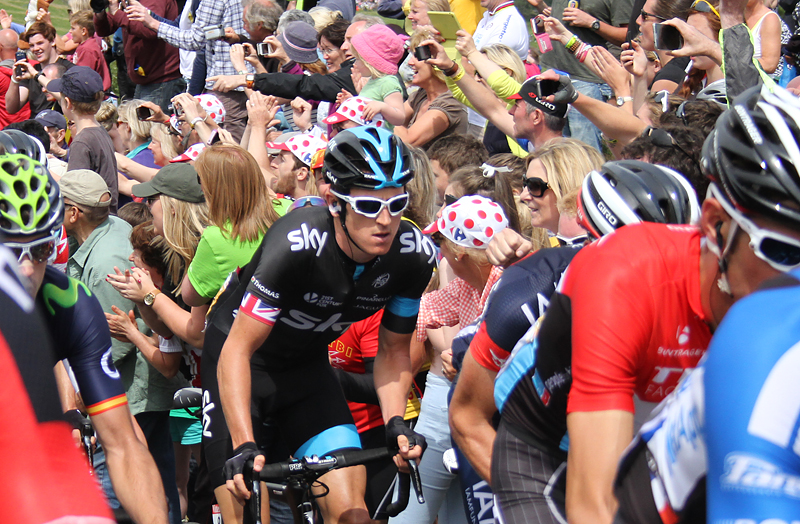 Nothing personal, he seems like a top bloke in all the interviews I’ve ever seen with him. And he’s a gun rider. Any rider who can ride the entire Tour de France with a fractured pelvis, which Thomas did in 2013 after stacking heavily on the first stage, deserves respect.

I mean, seriously, he had to be lifted onto his bike. And he still beat 29 guys.

He’s obviously talented, and driven. You don’t win two Olympic gold medals in the team pursuit (2008 and 2012), or be a key member of the team that holds the world record in the event, without both of those things.

It’s just, you know, he’s always been British. He was British when he won those gold medals, and he’s definitely still British. The arch enemies. I lived in England for three excellent years and I have lots of great British friends, but supporting their sportspeople? Nope.

But Thomas is Welsh. Welsh people are great.

I went to Wales once, in the middle of winter, and the weather was so utterly, irrevocably wet and horrible that we spent three days trying to find pubs with fireplaces to dry out by. A few sodden castles, a lot of sodden sheep, and allegedly some sodden mountains that I couldn’t see for all the rain, fog and sodden bloody clouds. It wasn’t all bad, we spent many a pleasant hour sipping Welsh beer and chatting to locals.

We met some of the friendliest people I have ever come across, but anyone who grows up riding a bike in Wales really has to put up with some horrible conditions.

The thing about Thomas is despite all that he’s achieved, he still seems to be perpetually underrated. He’s always behind the superstars Cavendish, Wiggins, and Froome. He’s respected as a great team man and a hell of a domestique, but without the headline results, he’s more often asked to sacrifice himself for another leader.

The other thing about Geraint Thomas is that he has been in some pretty special form recently. He was the only British rider to finish the Tour de France, and the highest-placed member of his Sky team, in 22nd overall. Not amazing, but pretty good for a guy who was working for others.

When the team’s plans collapsed, and Richie Porte was thrust into the leadership role on the pavé of Stage 5, it was Thomas who buried himself to drag Porte back through the field, limiting his losses on the day. It was a magnificent ride.

He spent the rest of the Tour protecting the Australian, even as Porte’s (and the team’s) GC hopes wilted.

That’s what so admirable about Geraint Thomas. He’s so obviously talented, and yet so willing to subordinate his ego to the good of the team.

Sometimes he gets the chance to ride for himself. This year he won the GC at Bayern Rundfahrt, and even more impressively he achieved top ten finishes in the two cobbled monuments: 7th at the Tour of Flanders and 8th at Paris-Roubaix.

A surprise bronze medal in the Commonwealth Games time trial earlier in the week, against quality opposition including Svein Tuft, Luke Durbridge and Michael Hepburn, showed he had not just survived the Tour, but flourished.

Given all this, it’s not surprising that the Welshman was able to ride away from a shattered Commonwealth Games field and claim gold in awful conditions. It was a hard race, in demoralising weather, over a tough circuit with plenty of risky places to crash. Only 14 riders finished, out of 139 starters.

Crashes, mechanicals and punctures ruined the Australian team’s plans. As soon as Rohan Dennis went down on a wet corner, things spiralled out of control for the Aussies. Plans B, C and D were adopted and jettisoned. There was some bad luck, and some panicked decisions that may not have happened if race radios were present. It wasn’t Australia’s day.

It was a day for a Welsh strongman who thrives in the toughest of the spring classics.

Not that it was straightforward. Thomas had his own bike problems. He needed to change bikes halfway through the race, costing him time. And even more crucially, he punctured just a few kilometres from the finish, when he was riding solo towards the win.

He didn’t panic, he changed the wheel and got straight back to the task of winning.

Thomas said afterwards, “I’m just so proud. I only really came [here] out of national pride and wanting to ride for Wales. I never really expected to medal, if I’m honest.”

It’s hard to think of a more deserving winner. I am happy for him.