The Tour de France is nearly upon us, and July is going to be a magnificent bleary-eyed sporting hell.

It’s a king tide of sleep deprivation: the Tour de France will finish each night just in time for kick-off in Brazil, with barely a pause for a disco nap before switching from polka dots and camembert to a Brazil shirt and a cheeky glass of cachaça.

It’d be an insomniac sports fan’s wet dream, if that wasn’t a contradiction in terms.

I don’t know about all of you, but I’m already basking in the hazy embrace of jet-free jetlag. I’m not a football expert by any stretch, but I’ve been more than willing to treat the World Cup as the pro peloton treats a last-minute block of altitude training: after all, nothing beats acclimatisation, and this World Cup is pretty excellent.

A few 2am starts a week are the perfect preparation for three tense weeks of gruelling chess on wheels.

As a result, my form for watching this Tour de France is better than it has ever been. My coffee machine is churning out double espressos faster than a Tinkoff-Saxo mechanic can change a wheel, and I’ve had the glassy-eyed stare into space working a treat in every meeting for the last fortnight.

My preferred survival techniques for the next month include grabbing a couple of hours’ sleep between dinner time and the TV coverage (starting 10pm AEST most stages); coffee; sleeping on public transport; more coffee; sleeping in a meeting room at the office (perhaps set up a PowerPoint slide show full of boring graphs on loop to warn off anyone glancing through the windows); yet another coffee; and a big bowl of Harden The F*** Up.

This is an endurance sport, spectating, and it requires preparation and dedication. You need to maintain your energy levels. Under no circumstances let your fridge or pantry run out of late-night snacks. You’ll definitely need to send a domestique (in my case, I am the domestique) back to the fridge for refreshments during the stages.

Timing is everything. Nobody wants to suffer a hunger flat on one of the key climbs of the race, and the shame of missing Contador attacking Froome on the Col du Tourmalet because you forgot to get the brie out of the fridge before the sprint point at Trébons would be almost unbearable.

Understand that road racing means performing in conditions that vary immensely from region to region. Don’t go in with the attitude that the same approach will work in all conditions.

A pint of bitter and a packet of pork scratchings is a perfectly appropriate accompaniment to Stages 1-3 (Yorkshire, Cambridgeshire and London), but will be frowned upon when the race reaches France.

Similarly, it’s Flemish beers in your bidon for Stage 5 (which starts in Ypres); save the Beaujolais for Stage 12, which finishes in St. Etienne; and the wines of Aude, Jurançon and Madiran for the Pyrenean Stages 16, 17 and 18.

Italian or Spanish wine are perfectly acceptable if you’re supporting Vincenzo Nibali or Alberto Contador, but I would probably avoid Kenyan or British plonk even if you want to give Chris Froome a morale boost.

Of course there are also plenty of riders from countries with excellent beer, so perhaps responsibly sipping something from the homeland of the previous day’s stage winner would be an appropriate mark of respect?

Of course Australia’s brewers and winemakers are just as talented and successful as Australia’s cyclists, so here’s hoping that the victories keep on rolling for Orica-GreenEdge and the Aussies riding for other teams.

Obviously it’s not just about the flash food and fancy booze. This is a bike race.

Non-OGE Aussies include Richie Porte (Sky), Michael Rogers (Tinkoff-Saxo), Heinrich Haussler (IAM), Adam Hansen (Lotto-Belisol) and Zak Dempster (NetApp-Endura). At the time of writing, Garmin-Sharp has yet to announce its squad, so there might be more if Rohan Dennis earns a place.

Speaking of Dempster, it’s his first Tour de France (and the first for his team) so keep an eye out for him. He earned his spot with a couple of very good results at the Tour of California, even beating German ace John Degenkolb in a sprint in Stage 7. 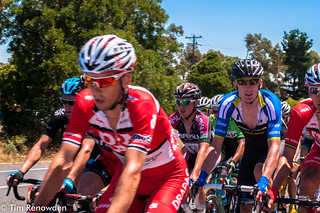 Sadly, there is no Cadel Evans this year. The great man has passed on the BMC Tour de France leadership to his younger American teammate Tejay van Garderen, and judging from his Twitter feed will be spending July rolling around Lake Como and drinking coffee.

On the one hand, I’m sad to be missing Cadel. On the other, it’ll be refreshing to watch a Tour without the stress of high expectations for an Aussie overall win.

Australians will be crucial in the GC battle, though – Richie Porte and Michael Rogers are the top lieutenants for the two hottest overall favourites, Chris Froome and Alberto Contador respectively.

If the recent Criterium du Dauphine is any guide, there is barely anything between the two in terms of form. Team support will be crucial. Tinkoff-Saxo has been rocked by the suspension of Roman Kreuziger for a possible biological passport infraction from 2011-2012, which makes Rogers’ role even more important.

I expect this Tour to be much more open than the previous two years, with Contador back in form and a team capable of hurting Team Sky.

Vincenzo Nibali and Alejandro Valverde also showed they’re peaking at the right time with victories in their respective national time trial championships over the weekend (and a 2nd in the Spanish road race to Valverde, who let his teammate Ion Izaguirre take the win).

In lead-up races Nibali’s Astana and Valverde’s Movistar have shown a willingness to put Sky to the sword at every opportunity, so don’t expect everyone to sit back and let the British team have it all on their own terms this year.

Froome has looked extremely impressive at times, but his season has been far from perfect, and the same goes for Richie Porte, who has question marks over his form.

Then there’s the cobbles of Arenberg (stage 5), where pavé-masters Fabian Cancellara, Sep Vanmarcke and Greg Van Avermaet can reprise their Paris-Roubaix/Tour of Flanders rivalry while a bunch of skinny climbers rattle around like cartoon skeletons on a haunted train.

And then there’s Simon Gerrans, who sounds dangerously confident of snatching another stage win.

There’ll be something to look forward to in every stage, so suck it up, get your coffee addiction cranked up to 11, and prepare to stumble dazed through July like the best sleep-deprived-zombie-muttering-in-French that you can be.

Until then, SLEEP WHILE YOU STILL CAN.

This article first appeared on The Roar.